In modern day Scandinavia, nissen or tomten is first and foremost associated with the Christmas holidays, and often perceived as a Scandinavian version of Santa Claus. This association is however rather misleading - it is also important not to mistake him with somewhat similar creatures, like elves or goblins. Nissen stands out on his own, and represent a quite different set of values.

In the old Nordic folklore, he existed as a figure who lived very close to people in their everyday existence. He was primarily imagined as an elderly man, not much taller than a child, who bore clear signs of high age, his face yellow as parchment, wrinkled like an old tree root. He often had a full beard and dressed in the everyday clothing of a farmer, in grey wadmal clothes, breeches, a long jersey and a red woolen cap. He was quite hairy, all over the body, as well as unreasonably strong for such a tiny creature.
Unlike dwarves and the hulder people, who inhabited the hills and forests, nissen had his abode in houses and barns, and served as a guardian, as well as a helper. He was essentially good-natured, and loved conducting practical jokes. It was however, important to be on good terms with him, for he could create a lot of turmoil if he was neglected.
The priest and historian Andreas Faye has written:

"Nissen is generally an honorable being. If treated with kindness and respect, he is very willing to be of service. He helps the milkmaid to take care of the animals, and helps the cook to scour, carry water and do other heavy work; she must nevertheless make sure she does not upset him, or forget to supply him with good food and drink – especially around Christmas."

Hence, at Christmas Eve, nissen was presented with the very best of the local cuisine; normally this included a decent portion of Christmas porridge, lefse (a traditional soft, Norwegian flatbread) and beer. If nissen was not satisfied, he would not hesitate to revenge himself by making life unpleasant for the people around him. Well-known is the story about the girl who was so hungry that she ate the porridge herself, instead of giving it to nissen. He later on retaliated by dancing with the girl, till she died.
Other stories may however be of a more humorous form. A legend from Østfold in southeastern Norway tells for instance about a milkmaid who got help from nissen to look after the cows. In addition to rightfully supply him with milk and treats, the maid one day also decided to sow him some new clothes. This gesture however, turned out to backfire on the poor girl. One evening, nissen came to the house, wearing his new ensemble. Rather baffled, the maid received a resignation from the little geezer, who proclaimed he was too  pretty now to struggle and strive in the barn!

Stories and Christmas cards from the late 1800s have helped to spread the image of nissen, and preserved him as an important part of Scandinavian culture. Although he has adapted some features from the commercial, American Santa Claus, the old-fashioned fjøsnisse still remain as perhaps one of the foremost symbols of Norwegian Christmas. Even nowadays many still put out a bowl of porridge for him on Christmas Eve – a survey conducted in 2009 showed that 9% of all Norwegians carry on this 1000 year old tradition.
“På låven sitter nissen” (The nisse in the barn) is a Christmas song with lyrics by Margrethe Munthe. It was first printed in 1911, and still remains as one of the most well-known and beloved Christmas carols, especially among the youngest. It is truly a cheerful and sweet little tune, and tells about nissens fight to keep his Christmas porridge - a bunch of mice are namely trying to steal it. But nissen is an old grump and refuses to share. The first verse goes something like this (a presentment of the melody follows below):

He nods his head and smiles, oh so happily, cause Christmas porridge, he just loves to eat!

They are also very fond of Christmas porridge, and they’re dancing, dancing in a ring!

Eventuelly, nissen threatens to retrieve the cat if the mice do not disappear. As by a stroke of magic the conflict is terminated, and the little rodents flee the scene.

Created and administrated by Camilla Christensen
Email ThisBlogThis!Share to TwitterShare to FacebookShare to Pinterest

And welcome to the Legends of the North.

As a native Norwegian, I grew up with the intriguing stories about trolls, water spirits and and other subterranean beings. Later on, I took my love for these stories one step further, and earned myself a master's degree in culture history and folklore, as well as a bachelor's degree in history of art. I currently work as a history communicator and freelance writer.

Through this blog, I wish to make the magical tales and creatures of the Nordic folklore widely known, also for an audience with little or no knowledge of any of the Nordic languages.

Long after he had fallen asleep, they had heard them rattle and stir throughout the night...

I have come to understand, more than once, that invisible forces are with us. Now I want to tell you about something that has happened to m... 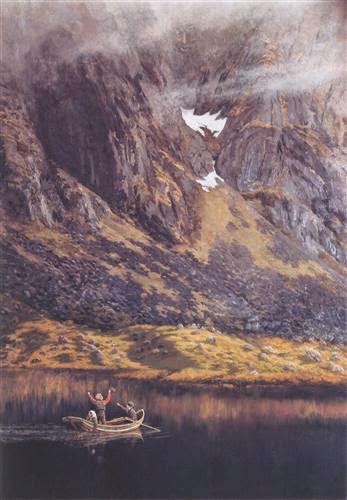